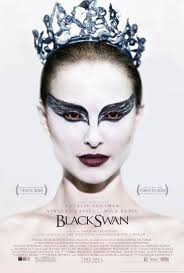 By the director of The Wrestler, Darren Ofonsky, Black Swan has been getting rave reviews. It's a psychological thriller with an actress I love, Natalie Portman, so at least she will be good. What did I think of the movie though? Let's read my essentially spoiler-free review...

That was a scarier movie than I thought. Without giving away too much for potential watchers, Natalie Portman is a tour-de-force as a ballet dancer whom we watch descend into madness. Mila Kunis does a decent job as the potential threat to Portman's success and--as previews hint--possible lover. I say possible because as the film goes on it becomes harder and harder to tell what is real, and what is just a hallucination on Portman's part. Vincent Cassel also has not been getting enough recognition for his role as the both sleazy-yet-charming director of Swan Lake--the play Portman has the lead role in, hence the movie's title. As I said, Portman is amazing and deserves at least a best actress nod for the Oscars. Acting aside though, how was the movie itself? Pretty darn good.

The movie is tense, at times a bit scary, and after a slightly-slow start, exciting. The difficulties of being a ballet dancer are on display, from potential eating disorders to really damaged feet.  The imagery is astonishing, from the Computer-Generated Effects when Portman is suffering from psychosis, to the ballet dancing. I found it took a little while to get where we all knew it was going, but when it starts providing pay-offs to all the dramatic build-up it is quite satisfying.

I'd definitely recommend seeing this movie, but be warned it can be quite creepy, and has brief flashes of violence that will give you shock--they don't say "psychological thriller" without good reason.
4 out of 5 stars.

Here's the official trailer, although I find it gives away too much of the movie, it might be better to go in only knowing as much as I did--very little (I saw a 15 second ad, and read a review or two).