A Flashback Friday--Ultimate X-Men: Ultimate Collection Book 1 AKA Yes, they did just use "Ultimate" twice in one sentence. 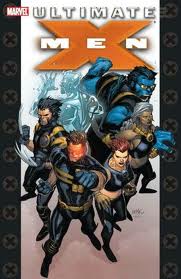 Ultimate X-Men: Ultimate Collection Book 1
As a reader of the regular X-books up until recently, diving into the alternate-universe of Marvel comics known as the "Ultimate" line resulted in an odd feeling of things being similar, but also different. Sort of like visiting an old house you lived in years ago and seeing how other people took the basic setup and made a ton of changes. Weird same-but-different vibes aside, what did I actually make of the book? Let's discuss, and be forewarned there are spoilers, but considering these comic issues came out back in 2001 and 2002 I think you've had enough time to catch up.

Wow, this story flows fast. By the end of the first issue we already have a team assembled and they've saved some lives. By the end of the sixth issue the destruction of America has been averted and Magneto is seemingly killed by professor Xavier. Not to mention in issues 7-12 we have the Ultimate-universe's take on the Weapon X program, full of fun covert-ops missions and cliche' evil military men. The art looks good and the aforementioned story is enjoyable if not amazing. You can see Mark Millar really wanted to put his own spin on the X-men without the constraints of normal continuity and when his imagination is allowed to run free there is a 50-50 chance you'll get masterpieces like the Ultimates, or junk like Kick-Ass (I'm sorry, it started strong but just wasn't that good). 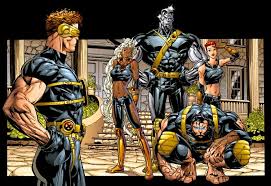 This is definetely one of Millar's better works but there is a key flaw, nothing really sticks out in my memory about this book. It was fun and had action and even some great scenes with Ultimate Nick Fury, but when I think back on this book all I really remember are some cool action-scenes, Magneto seeming a bit more evil than in the normal Marvel universe, and the usual metaphor of mutants as a minority group with the requisite moments of, "We have to be better than the worst members of the majority." I'm pleased I bought this book, and have enough curiosity to pick up the 2nd, but can't say this was amazing. Just quite good.
3.5 out of 5 stars.
Ultimate X-Men: Ultimate Collection, Vol. 1

for the Amazon Link if you feel the urge to buy it right now.
Posted by David Charles Bitterbaum at 12:00 AM