Not quite terrible, but definitely not good: X-Force & Cable: The Legend Returns 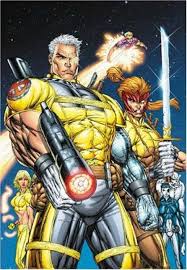 X-Force & Cable: The Legend Returns
Before Uncanny X-Force (a great comic) there was the X-Force who were a secret team led by Cyclops, and before that there was this six issue comic that took the X-Force vibe from the 90s and brought it back. I like Liefeld's art somewhat unlike many people, so why didn't I like it?

This was written by Fabian Nicieza with plot-design by Liefeld. It features Cable making a team of mutants to fight some monster called Skorn, and has Wolverine show up (as is mandatory) and Deadpool for a few pages even though it makes little to no sense for him to appear. Oh, and it has a future-version of someone from an alternate future to Cable's come back to help him stop that future from occuring....yeah, time-travel plots always give me headaches.

This comic just wasn't that good. The art was decent, its Liefeld doing better than in the past, although apparently for this comic he recycled some old unused X-Force art from the 1990s in addition to new drawings, so it shows his style hasn't really evolved when someone can get away with doing that. The plot is just confusing, with time-travel junk and random appearances by various characters, not good.

The main reason I picked this up is it was a continuation of Cable's adventures after the amazing ending of his solo comic and short run of Soldier X which was another good comic. Also, the Cable and Deadpool series loosely tied in with it. I really shouldn't have bothered buying this though, because it just is dull, with plot elements that don't make sense and decent enough art but it seemed Liefeld just decided what he wanted to draw and told Nicieza to make a script around it. There was some good moments of dialogue, but the story overall was just weak and convoluted. Liefeld turns in some decent art and he sure does know how to draw a fight scene, so he's got that going for him. I wouldn't recommend getting this though. It could have been worse at least, but this is just below average at best.
2 out of 5 stars.
X-Force & Cable Volume 1: The Legend Returns TPB

if you choose to ignore my advice to skip it.
Posted by David Charles Bitterbaum at 12:00 AM