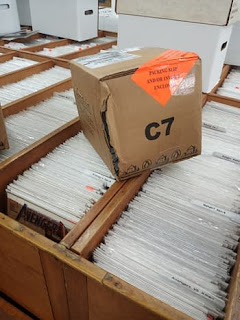 As I and others have extensively covered, Marvel switched to Penguin Random House as its comic publisher/distributor. IDW is planning to switch to it too in June of 2022. PRH has a plum gig here and they just have to not screw it up. Hence, in their first week of actually shipping comics, they have screwed some stuff up. That's how things go sometimes.

PRH sent that first batch of comics out this week and some big shipments were outright lost. Ones that arrived where they needed to were often not packed that great and damages were extensive. Stores are upset, customers are mad, and PRH has a lot of comics to refund and/or replace. Diamond was known for not shipping comics the best, so when they look golden compared to you, that's bad. They need to get their act together quickly or this could turn into a major fiasco. Perhaps they should see how Lunar is packaging things with care currently and follow suit? I am quite sure there will be more on this as it develops.