The Fry Sauce from Freddy's is Amazing 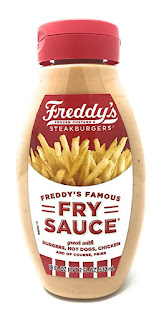 Up until recently, I had never enjoyed Freddy's restaurant. They seem to be expanding into the Saint Louis region, however, as a number of them are opening up around us and a brand new location just started serving grub a few weeks ago. Having heard it was good, I picked some up for Samii, Clarkson, and myself. The fries are almost like a shoestring fry and very crisp, Samii liked her burger, and I found the chicken sandwich to be lovely too. What really caught my attention, however, was Freddy's fry sauce. I'm not sure what's in it, but that stuff is amazing.

Honestly, I'm not even much of a sauce person. I usually am not into the texture of something wet on my food. I didn't even start sometimes dipping my fries into ketchup until I was in my 20s. That said, something about fry sauce just sets my taste buds alight with joy. It's a bit like ketchup but has a creamy tanginess to it that grabs your attention. It isn't overpowering and instead compliments whatever you're eating expertly. They sell bottles of fry sauce for you to take home at Freddy's and I plan to buy one soon and put it on an assortment of foods that would benefit from the yummy taste of fry sauce.

Note: This is an opinion post. I was not paid by Freddy's for writing about how amazing their fry sauce is, but if they want to send me some for free I would gladly accept it!