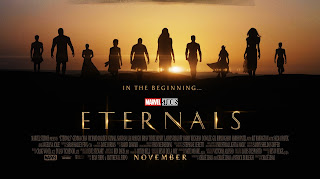 MCU movies have morphed into required viewing for many. Even the less amazing ones are watchable, with, "Thor: The Dark World," being decent enough and the way too long runtime of, "Avengers: Endgame," being possible to withstand with a break or two as there are some standout bits. The latest Marvel flick is, "The Eternals," and it is getting reviews that range from average to a bit above average. The AV Club outright says it is, "Just another Marvel movie," for better or worse. Perhaps such a big team would be better served with a Disney+ show to introduce them? I don't know, but I'll still see it because it's a Marvel movie. It may not be among the most successful MCU films, but it will still probably make a lot of money too.

It isn't like Marvel movies can't still be inventive and weird. The oddly-somewhat-disliked-by-many movie, "Doctor Strange," astounded me in how off-kilter and odd it was. "Wandavision," was a Disney+ show as opposed to a movie but was utterly fantastic. I've heard that, 'Shang-Chi," is a hoot too and I plan to see it as soon as it is streamable on Disney+. Once I see, "The Eternals," I can offer my thoughts on where it goes right or wrong, but for now it seems that it is simply, "Okay," or, "Good," instead of, "Great," according to those who have seen it already.