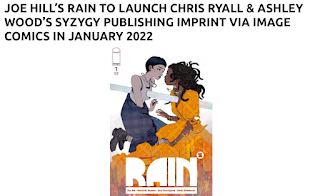 I know I just wrote about another Image comic earlier today ("The Black Monday Murders," to be exact), but I have even more interesting news from Image to share. Two creators who previously did a lot of work at IDW are launching a new imprint at Image (in the same way there is the Skybound imprint) which will be known as Syzygy Publishing. This caught my attention as I love a lot of the old comics Ashley Wood was involved in (from his work on, "Uncanny X-Men," with Joe Casey to his solo IDW work like, "Popbot,") and Chris Ryall has created good stuff too ("Zombies VS Robots," with Ashely Wood). Neither of them is directly making the first comic from their new imprint, although Ashley Wood is contributing a gorgeous variant cover as can be seen a bit further below in this post.

The debut comic from Syzgy Publishing is, "Joe Hill's Rain." It is a five-issue mini-series that adapts a short story by the talented writer Joe Hill (as the title indicates). As for the actual creative team, the PR release says how, "The award-winning creative team consisting of writer David M. Booher (Killer Queens), artist Zoe Thorogood (The Impending Blindness of Billie Scott), colorist Chris O’Halloran (Ha Ha), and letterer Shawn Lee (Madman Artist’s Select) will come together to bring Joe Hill's Rain to sequential form. Ryall and Wood contribute editorial and logo/production design, respectively." Basically, this imprint allows Wood and Ryall to curate some talent to make cool comics, much in the same way Robert Kirkman uses Skybound to make comics he likes/wants to get adapted as most of his stuff is now.

As a big fan of Ashely Wood, I am intrigued by all this. Plus, if it means we get some cool variant covers by Wood along with quality comics then I'm all for this. Bleedingcool claims Image has plans for even more imprints with big names, so I wonder what else might be coming down the pipeline. It sounds absurd, but it just occurred to me how I'd be quite amused if something crazy like former DC bigwig Dan Didio launching an imprint with Image happened. If that ever does occur I'm gonna claim I called it first.