"Human Target," #1 Takes a Bit to Get Going, but then it Gets Extremely Interesting 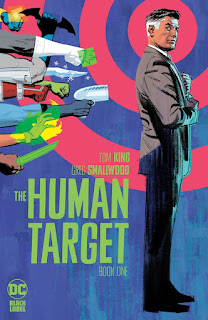 I always give Tom King a chance. Ever since I read, "The Vision," I eagerly pick up whatever comic he is writing. Whenever one does that you're guaranteed amazing art and a story that either astounds you ("Omega Men," is another good example) a decent if flawed read ("Strange Adventures,") or an absolute mess ("Heroes in Crisis," springs to mind). King always gives it his all, however, and he and Greg Smallwood have something quite intriguing with this first issue of, "Human Target." This is a Black Label book so it is out of continuity, which makes sense as it follows Christopher Chance, a man whose whole gimmick is almost dying for people others are targeting...and now he's actually dying.

I won't spoil too much about who might have put Chance in the position of nearing death as when the possible suspects are revealed is when the book really clicked into place for me and became a comic I eagerly await the next issue of. Also, I won't spoil much as it seems this comic isn't on stands everywhere until next week. DC has had a very messy release schedule due to the paper shortage so some stores are getting stuff early, some late, and so forth. I've seen, "Human Target," #1 on some shelves but not on others. I can say that when it is supposed to be on sale everywhere next week you should pick it up. 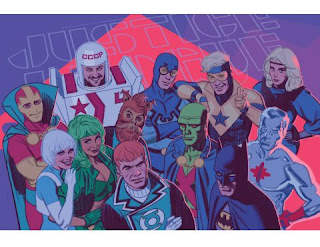 King can run hot or cold, and here he seems to be running red-hot with a killer idea and a fantastic partner in the form of Greg Smallwood. Smallwood is among my favorite artists to draw Moon Knight and he excels at any task he's given. When drawing a variety of heroes and villains in the DC-Universe during this issue Smallwood continuously astounds. I can't say for sure that, "Human Target," will end as strongly as it has begun, but if it does, I'm eager to go on this wild ride.

Posted by David Charles Bitterbaum at 10:38 AM