With it's Final Issue, "Immortal Hulk," Sticks the Landing 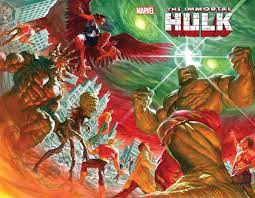 The other day a friend and I agreed "Immortal Hulk," issues #1-#25 are a masterpiece of storytelling. Full of philosophy, body horror, and general weirdness I loved reading it. The comic was written by the amazing Al Ewing and had art often by the now-disgraced Joe Bennett (more on that later). My friend and I also agreed on how issues #26-#50 were at times a bit slow or meandering, but still managed to entertain a great deal. With its finale completed, we're left with one of the best runs of a Hulk comic ever. This is arguably up there with the original stuff by Lee & Kirby, what Peter David gave us in the 1990s, and the Planet Hulk/World War Hulk stuff by Greg Pak.

"Immortal Hulk," gave us a Hulk who was smart, scary, and either wanted to save the World, destroy it, or thought destroying it would save it. We saw different personalities of Bruce Banner/the Hulk, witnessed all kinds of fights and surreal imagery, dug deep into psychology, and in the end--sorta a spoiler--got to watch Hulk yell at God (or some version of him/her) about life and why the Hulk even exists if all the Hulk seems to do is annihilate all that exists around him. It was a fabulous run.

The one stain on this majestic comic would be that as these issues unfolded more and more was revealed about the comic's usual penciler, Joe Bennett. I turned out he had previously posted a number of homophobic, antisemitic, and generally offensive comments and drawings. It started being apparent there were problems as early as issue #43 of, "Immortal Hulk," itself which contained questionable imagery, encouraging folks to dig deeper and find some really unsavory stuff about Bennett. As more was learned Al Ewing said he would never work with Bennett again and Marvel said they were cutting ties with Bennett after, "Immortal Hulk." One could be a little snarky and point out Marvel waited until, "Immortal Hulk," was done to finally drop Bennett, but I said I could be snarky, not that I would be.

Controversy with Bennett aside, "Immortal Hulk," was a wonderful series that utterly amazed me for half its run and still was pretty great for its back-half before closing strong. I look forward to the inevitable omnibus in 2022 or 2023 and will save my pennies up for it. Now we get to see what Donny Cates and Ryan Ottley have in store for us in their unenviable position of following after this amazing run.