Flashback Friday AND Film Friday: "Euro Trip," is an Underrated Gem of a Movie 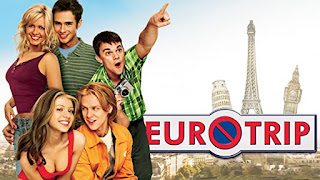 Hey, remember how miserable the, "American Pie," movies were? They were just basically gross-out humor with little deeper jokes or meaning. Do you also recall the movie, "Road Trip," that came out and how it was basically an imitation? If any of that rings a bell you just might remember, "Euro Trip," from 2004 and how against all logic it is actually absolutely hilarious and clever. Yes, seriously, a sort of sequel to a pale imitation of something that already sucked is in fact often genius and funny. I know, it's weird.

"Euro Trip," centers on a bunch of friends going to Europe so a man can meet his internet pen pal after having a misunderstanding with her so he can apologize for being rude. They take this trip after he learns his girlfriend has been cheating on him when a band (fronted by a cameoing Matt Damon) sings a song all about how she's two-timing him titled, "Scotty Doesn't Know." That's clever, and it just gets sillier. We meet soccer hooligans with hearts of gold, witness a bunch of jokes about the strength of the American dollar in Eastern Europe at the time, and there is a surreally ingenious bit about the Pope and people thinking a new one has been appointed. There's still gross-out humor and sex jokes aplenty, but they're clever gross-out humor and sex jokes mixed in with the smarter bits. 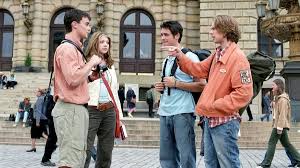 I personally believe that, "Euro Trip," was dismissed before it could have a chance. It has tons of negative reviews, absolutely bombed in theaters, and plenty of folks still only vaguely recall it as even existing. It has fans though, as this article in 2014 observed when it turned 10 years old. Man, I saw this for the first time in theaters back in 2004? I am old. That doesn't take away from the fact that even if some jokes in the movie haven't aged well a lot of this flick still stands up today 17 or so years later. I will still always contend, however, that the, "American Pie," movies this somewhat sprang from are absolute garbage besides some diamond in the rough aspects--Eugene Levy is always a treasure, after all.