I Tried Lily's Toaster Grills and Loved Them! 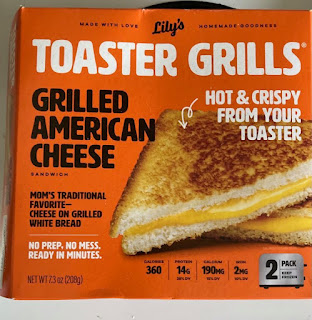 Grilled cheese you cook in a toaster. It sound insane, but Lily's Toaster Grills are exactly that and they are delicious. They are incredibly easy to prepare as you simply pop them out of the box and their plastic packaging, microwave them 30 seconds, put them in the toaster with it at medium-high, and then enjoy. They are as tasty as they are an ease to make and I was surprised how buttery and rich they were. I also was concerned about cheese leaking out of these into the toaster, but that did not happen at all (thankfully)!

I've only tried the grilled American cheese, but there are many other varieties. They've got ones with ham, turkey, other kinds of cheeses, and more! I also like that Lily's Toaster Grills donates a portion of all sandwiches made to those in need via their nonprofit, LuvFromLily. That's awesome too. I plan to try some more Lily's Toaster Grills in the near future as these were a delight.

Note: As I always add to assure people I wasn't asked to do paid content, this is a pure opinion post. I wrote this as I really loved Lily's Toaster Grills. I bought them at the store and found them to be a treat, I was not contacted by anyone to write a post or such. Of course, if Lily's wants to send me some coupons I wouldn't say no, however!