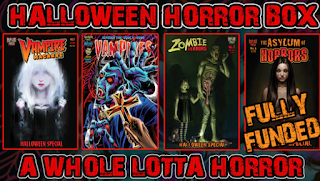 I wrote before about getting some excellently packed comics from Asylum Press and recently reviewed a comic I enjoyed published by them in my latest capsule reviews. The head person of Asylum, Frank Forte, wrote me to thank me for the kind words I've been sharing and let me know that Asylum Press is actually currently running a Kickstarter campaign to help fund an assortment of snazzy horror comics. Known as the, "Halloween Horror Box," it is a collection of all new comics from Asylum press which backers can pick to get some or all of with assorted regular and spiffy variant covers.

I want to thank Frank for telling me about their Kickstarter as Aslyum Press puts out cool comics and these are bound to be great reads. Plus, as I said before, they pack stuff well. Therefore, the comics will be fun and packed safely for backers. The campaign actually has already achieved its funding goal, so now there are just awesome stretch goals left! Here is that link again so you can give it a look.

Posted by David Charles Bitterbaum at 11:02 AM