Rant-Reviews: I Haven't Done One of These For a Bit

It's Been Some Time

I realized I have not done some of my beloved/reviled capsule reviews since the start of this year, so why don't I whip some up for you right now to enjoy? Let's review some recent-ish comics and examine what I liked and what left me wanting.

A Smattering of Comics 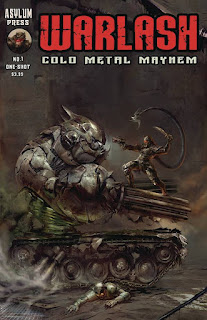 I blogged recently about how great an experience I had ordering this comic from Asylum Press, and I finally had the chance to read it. Collecting an assortment of great stories, this one-shot of adventures features Warlash, a character who is a bit like Batman meets Judge Dredd, but with his own interesting quirks and complexities too. I really loved the first story which featured art by the amazing Steve Mannion as it told the dark tale (written by Frank Forte) of a man named Grubbs who also has monstrous mutations. The other yarns are great too and this is a lovely one-shot about a character whose adventures I continue to enjoy. 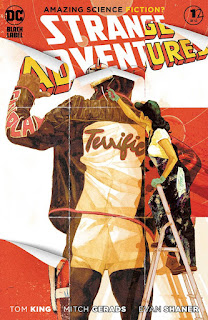 Well, that was an anti-climatic ending. For those who have yet to read this final issue of the latest Tom King maxi-series (he's done some solid 12-issue series) or want to read the story in full, I won't spoil too much. The whole series was a bit about trauma, PTSD, and how it can affect us as a person. That was interesting. There was a lot of Mr. Terrific too. That was good too. The story had some twists and turns, but just kind of deflated in this final issue with the whole maxi-series clearly not being about Adam Strange so much as using him to tell an at first intriguing but overall just kind of melancholy yarn. It was an alright way to spend 12 issues, even if we peter out a lot here at the finish line. At least the alternating art with Doc Shaner and Mitch Gerards (one for past, one for present) was consistently a treat. 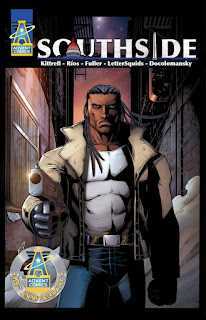 This was the first comic I've read from Advent Comics. It was solid. This first issue is by Tony Kittrell and Chepe Rios, who make a good team. It follows a somewhat Punisher-style hero named Dalton Malone who tries to keep Washington DC clean of criminals. There's a lot of blood, gunfire, some nudity, and the comic has a nice edgy feel without being over-the-top gritty as it works in some humor too. Apparently, Advent Comics has been around 10 years and has been gaining in popularity, now it is big enough to be distributed with other larger indie comics. If, "Southside," is a good indicator of quality I'm interested in checking out some of their other books in the future! 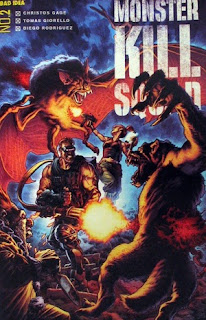 I swear, Bad Idea Comics puts out some good stuff and if they let their books speak for themselves without doing dumb P.R. stunts they'd still get plenty of ink written about them for their quality titles. That said, they keep doing weird stuff that overshadows how clever and fun some of their comics are. "Monster Kill Squad," is one of those good times, focusing on a team that kills horrific beings that started appearing at a rapid rate after the opening of the literal Pandora's Box. It's a good read with a winking tone from Christos Gage (sometimes a little too eager to crack a joke) and absolutely gorgeous artwork by Tomas Giorello. I just wish Bad Idea made their books easier to read for those who actually want to you, you know, enjoy them! 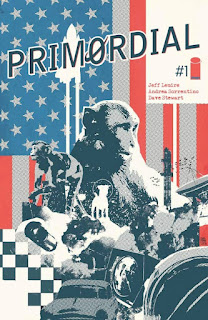 Jeff Lemire and Andrea Sorrentino have collaborated a bunch of times and rarely disappoint. "Primordial," imagines an alternate universe where something went horribly wrong with our space programs early on and something was discovered that resulted in the U.S. and Soviet Union shutting everything down. What exactly happened is a mystery, but it involves the animals sent to space by our nations and what exactly took them. Lemire and Sorrentino give us something creepy and delightfully sci-fi. No matter what publisher they're with (in this case Image) they almost always make awesome stuff!