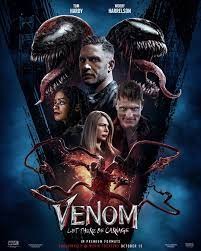 The first, "Venom," movie was a pleasant surprise. I expected it to be awful, but despite itself, it worked. The movie was full of tonal clashes (Tom Hardy as Eddie Brock was so over-the-top and everyone else seemed quite grounded), the tech-bro villain seemed underbakes, and at 2 hours and a good chunk of the movie before any symbiotes appear much it felt a tad bloated. The newest flick, "Venom: Let There Be Carnage," rectifies many of the flaws in the first but adds some new concerns to result in a film that's better than the first but still imperfect.
"Venom: Let There Be Carnage," is a lot more silly and comedic in a manner that matches Hardy's energy. We get a ton of Hardy talking to Venom/himself and it is a delight of zany bits. Woody Harrelson is a fantastic Cletus Kasady/Carnage, bringing a ton of menacing energy. Just seeing Hardy and Harrelson riffing off each other is a delight. As for my other qualm with the initial flick--the running length--this is actually a shorter and sleeker sequel, clocking in at a mere 97 minutes (with credits and the mandatory mid-credits stinger). The latest Venom movie isn't perfect, it adds a romantic interest for Kasady that makes him seem almost too human instead of like the over-the-top monstrous killer he is before even acquiring a symbiote. Plus, Eddie Brock's ex and her new boyfriend-now-fiance return but have precious little to do in the movie besides serves as audience stand-ins discussing how zany and weird Brock and Venom are. 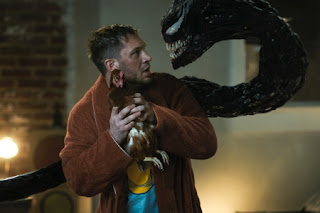 The special effects are a bit sleeker than the first movie, with an even bigger budget allowing some insanely inventive symbiote-style effects, especially when Venom and Carnage fight at the film's climax. The best moments aren't over-the-top alien fisticuffs, however. They are when Hardy or Harrelson are just being weird and funny with each other or by themselves/with their symbiotes. "Venom: Let There Be Carnage," isn't a great movie, but it is a good time and despite some new issues it does improves significantly over the first flick. It's worth a cheap matinee ticket or a rental once it's viewable at home. Sony's little Universe of Marvel characters is doing alright after all.
3.5 out of 5 stars.
Posted by David Charles Bitterbaum at 5:16 PM