"Hob's Lane," #1 is a Striking and Dread-Filled Debut Issue 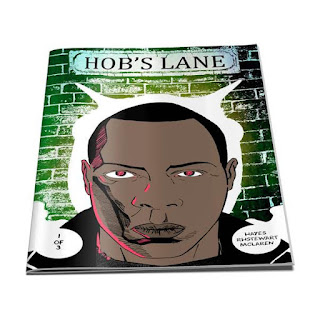 Blue Fox Publishing/Comics consistently puts out great indie comics, many with a horror-bent. Their latest upcoming title which will be running a Kickstarter campaign in the near future is the first issue of, "Hob's Lane." Written by Martin Hayes, with art plus colors by RHStewart, and letters by Paul McLaren, I found this initial issue to be instilled with a great deal of fear, dread, and those kinds of things you'd want from a horror comic!
A mysterious murder in a neighborhood causes London cop, Doug Kendal, to run into an old friend who lives near the scene of said crime, John Tate. Tate's wife was murdered three years ago in a mugging and since then he's fallen apart--metaphorically and as the comic goes on it seems somewhat literally. Things start a bit of a slow burn but then towards the end of the issue, the body horror really ramps up and gets fascinatingly disgusting. As this is just the first issue a lot of questions are raised with answers probably to come later. 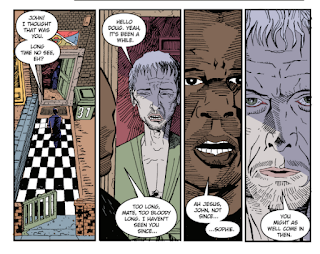 "Hob's Lane," is a great first issue for a horror comic. It's scary, suspenseful, and has some nice gross moments to really jar the reader. I enjoyed it very much and look forward to the Kickstarter campaign!
5 out of 5 stars.
Posted by David Charles Bitterbaum at 7:17 PM