Against All Logic, Bacon Mac and Cheese Flavored Sunflower Seeds are Tasty 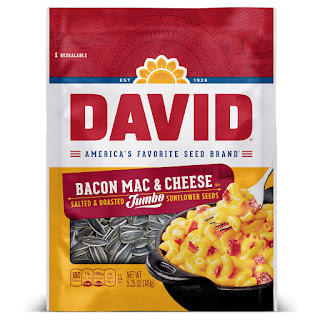 It sounds like an affront to nature, but the popular sunflower seed brand known by my name, David, has created a flavored seed designed to resemble bacon mac and cheese. I saw a little bag when we were browsing Five Below the other day and my curiosity got the better of me so I bought it. Unlike that time I sampled wasabi on a lark (that stuff is nasty), I was quite pleased with bacon mac and cheese flavored sunflower seeds.

First off, the interior seed is still a normal sunflower seed, it is the outer shell that has the flavoring. Instead of sucking simply upon the salted shell before cracking it open, you suck on a surreal cheddar-ish flavor with a hint of smoky bacon. It is fascinating how pleasant it actually is for something some strangely artificial. I honestly thought after trying this I'd spit it out with disgust, but man if it isn't a treat. I guess taking a chance on a weird food idea sometimes pays off, unlike when I actually gave mustard an attempt in grade school and almost vomited from how awful it was. Anyways, look for these in your local grocery store.