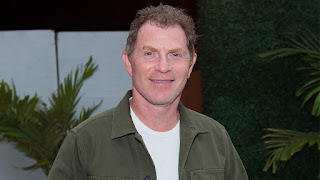 I greatly enjoy watching Food Network and even read a biography of the channel itself--which was fascinating. There have been some major personalities at Food Network who have come and gone, or arrived and stayed. Emeril was huge but just didn't evolve with the network and found himself left behind. Now, someone who did a great job evolving with the network, Bobby Flay, seems to be leaving. He had been there since 1994 and after 27 years a deal could not be worked out for his contract to be renewed. There could be a last-minute change, but as of now, Flay will be able to go do a show somewhere else (I imagine a lot of streaming services would be happy to scoop him up).

People who watch Food Network seem to either love or absolutely despise Flay. I don't mind him. I also don't purposely seek a show out just because he is involved either. He's moving on though, and it marks the end of an era at Food Network. Guy Fieri isn't going anywhere though, it seems, so if you love the mayor of Flavortown you can rest easy.