For Everyone Confused, Superman's Son, Jon, is Bi and not Clark Kent 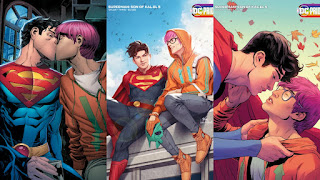 It was announced by DC that in an upcoming issue of, "Superman: Son of Kal-El," that Superman's son will come out as bisexual. People do not realize that Superman and Lois Lane have a son, that his name is Jon, and that he shares the title of Superman with his father. This led to countless confused new articles written in a clickbait-y manner about the Clark Kent Superman being gay. The general populace is confused, so as I clarified, this is the son of Clark Kent and Lois Lane, and he is bisexual, and that's perfectly normal and fine so quit whining online, or if you're going to pointlessly complain at least get the character you're bitching about right. Thank you and that is all.