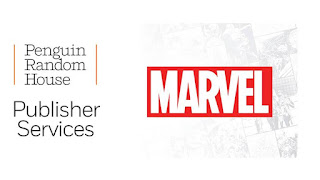 Remember how big a deal it was when DC quit the monopolistic Diamond in a very messy manner during the pandemic (a pandemic that hopefully ends soon)? It made us wonder if Marvel would follow suit and how that would quite possibly signal a death knell for Diamond. Wellllll, Marvel just announced it is going to have Penguin Random House distribute its floppy comics and has some very favorable terms for retailers who go with that method (free freight). Stores will still be able to order via Diamond as a wholesaler if they want and trade paperbacks and hardcovers will remain with Hachette for distribution. This change happens in October and Diamond released a tersely-worded response that hides how they are probably panicking now that 50% of their business will quite possibly evaporate.

DC has its own distributor that was kind of thrown together in a slapdash manner (Lunar) but is kind of working after a shaky start. If it had failed maybe Marvel would've been more hesitant to go its own way too, but now Marvel is going with an established and powerful company to distribute their comics. A lot of smaller publishers that are currently with Diamond may start to explore other options. Some already have, with SCOUT Comics being distributed via Diamond as well as DC's Lunar. We may be seeing the birth of multiple distributors like in the olden days and seeing the beginning of the end for Diamond (or it undergoing a significant restructuring and shrinking). There will surely be more as this situation develops.