"Proctor Valley Road #1," is an Odd Blend of Genres that Manages to Work Very Well 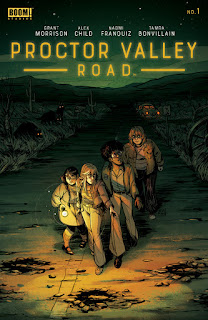 I love the works of Grant Morrison. They've created some of my favorite comics be it original works like, "The Filth," or established properties such as their run on, "New X-Men," "Batman," and more. They've got a new original creation in the form of, "Proctor Valley Road," they've co-written with Alex Child and its a little messy, but it works out in the end. The messiness comes from how much is going on. We've got a big cast of teenage girls and boys--so many people I had trouble remembering names. The comic takes place during the Vietnam war and features these teens going to explore the (apparently real) Proctor Valley Road.

The opening of the comic is scary as we witness a man faced with a haunted being, then the comic gets a bit of a chill slice-of-life vibe until towards the end going full-tilt horror with some really scary and bloody imagery. It's a mish-mash of genres and a lot of credit needs to go to artist Naomi Franquiz for balancing the everyday banality with the mystical horror in a way that it all just manages to fit together. 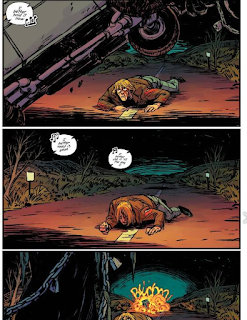 The blend of being a bit of a period piece, a humorous tale of a bunch of friends, and something quite terrifying with monsters result in a careful balancing act for Morrison and Childs, but I was quite entertained. I came to the book because Morrison's name was attached, but while they and Childs do a great job telling the story I was most impressed by Franquiz, as I've made clear. Her artwork just wowed me, especially when the terror kicks-in.

I wasn't sure what to expect going into, "Proctor Valley Road," as I thought it was going to be more straight-up horror. The mixture of scary-with-funny-and-the-everyday was stellar though. Between Morrison and Childs' writing plus Franquiz's stellar art, I quite liked it.