Film Friday: Will We Ever Get the Ninth, "Fast and Furious," Movie in Theaters? 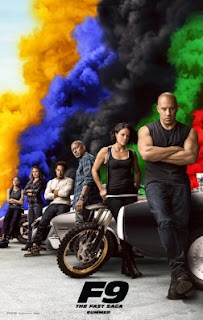 It started out as a bit of a, "Point Blank," rip-off with car racing, then it grew into a mega-franchise full of some great (and some mediocre) actors all doing crazy stunts among over-the-top special effects. Yes, I am talking about the, "Fast the Furious," Franchise. The ninth flick has been delayed time upon time due to how COVID-19 basically wrecked everyone's lives. It was maybe set to come out this May, but it's been pushed back one more month this time with it shifting from May 28th to June 25th. That is the, "For real," release date. Seriously, it'll happen this time! Right?

As I understand it, this month-long delay relates to it being thought even more vaccines will be distributed and people will feel ready to return to theaters. I've got to be honest, I'm in no rush to return to seeing movies in a theater until I know we've achieved a nationwide herd immunity and myself and my loved ones are vaccinated. Between this and that James Bond movie, "No Time to Die," some stuff has been quite pushed-back. It's been working pretty well for HBO MAX just putting stuff out for streaming, so maybe that should be considered even though it causes controversy? I dunno, maybe once June 25th is here we'll finally be able to see Vin Diesel talk about, "Family," and blow stuff up again...that or there'll be another delay. Time will tell.