Bad Idea's New Comic, "Eniac," Is Out and I'm Gonna Review It! 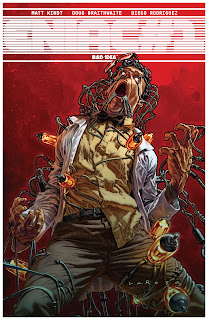 "Eniac," is the first official comic to be released by a new publisher I've followed with great interest, Bad Idea. They had that surprise limited release of, "The Hero Trade," but this is the, "True," debut for the company. There is lots of hype about their limited number of stores, the rarity of the comics, all of that. Is, "Eniac," good, however? Well, I've read it and can say that yes, it's fun! The comic centers on a computer named Eniac from World War II that basically gained a sentience of sorts and against America's own wishes ordered the 2nd atomic bomb be dropped on Nagasaki once it calculated that would surely end the war. After that point, it eventually was smuggled out of its secret military base, found its way online, and has impacted a lot of the world in secret since.

That's the setup, but the big problem is that Eniac now seems to be counting down to something so the Secretary of Defense has hired two of the best spec op agents around to kill the dang computer before it potentially obliterates humanity. The ladies hired to kill Eniac though are at a lot of risk because this supercomputer is linked-in to everything. So kicks-off the first issue of, "Eniac." I'd say the writer, Matt Kindt, does a great job setting-up the immense threat of Eniac and artist  Doug Braithwaite is phenomenal. Braithwaite draws scenes with people simply sitting around talking or laying-out the plot so well it keeps our eyes as engaged as when there's explosions or gunfire--which he also portrays with aplomb. 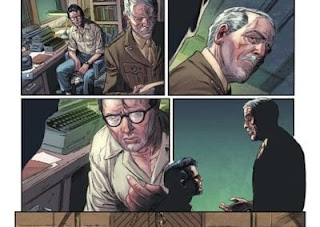 The first issue of, "Eniac," is engrossing from its plot to its artwork. There has been so much press and controversy over the way Bad Idea is distributing their comics that the actual great content of this first (official) release has been a bit overlooked--and it's fantastic. While first-printing copies of, "Eniac," are fetching a pretty penny online, the, "Not first printing," copies shouldn't be too hard to find. Get yourself one and enjoy!