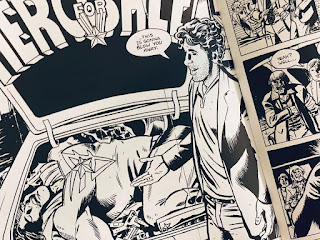 I wrote the other day about how, "The Hero Trade," has been getting a ton of buzz thanks to being a surprise release from Bad Idea, a new comic company with some unique ideas on the distribution and selling of comics. It was sent to stores that are on Bad Idea's partner list as if it was a random indie comic by some unknown creators, but then Bad Idea revealed the writer was Matt Kindt and the artist was David Lapham--not just someone with a strong Lapham influence on their art. This has led to a ton of interest in the comic with people wanting to acquire a copy. What about the actual, you know, comic though? Is it interesting and worth the fuss? Well, I was able to actually read the black and white ashcan comic and have got to say...it's pretty good.

I mean, it isn't surprising that this sampler is a quality read. Matt Kindt is a great writer and David Lapham has been a stellar illustrator (and writer) for decades too. What is, "The Hero Trade," actually about, however? It's fascinatingly disturbing. A seemingly normal man named Bob who apparently often has hustles going on has something unique for sale in the trunk of his car. He's been piecing it out for big chunks of money while driving all around the city. That special cargo? The body of superhero Captain Fab. Yes, this is a comic about a man selling body parts of a seemingly invulnerable and all-powerful hero. Why is he doing it? He refuses to say. How is he doing it? I imagine further issues will reveal more. 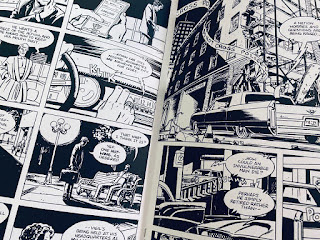 As it is now, this is a darkly hilarious comic that seems to be riffing on how we treat heroes as commodities and things we buy and sell by having a comic literally make that subject. In a world where heroes are now big business for companies and seem to represent capitalism more than truth and justice, it's fitting to have a book where the subject matter itself is a man chopping-up and selling a hero piece by piece in the same manner conglomerates squeeze every possible profit out of their hero movies/comics/shows/etc. The meta elements aside, the comic itself is engaging and with someone like Lapham on art is there any doubt it looks incredible?

Should you be able to find a copy I'd recommend giving, "The Hero Trade," a read for sure, or seeing as this is kind of a promotional ashcan, I imagine a more full release will occur in the future that'll be easier to scrounge-up a copy of. It's definitely a series that'll be worth following.