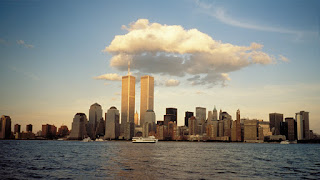 19 years ago I was in an eighth grade English class in West Virginia when a teacher came into our room and told another, "Something is happening to the World Trade Center." It was thought a plane had hit one of the towers or a bomb had gone off. Then in the next class I went to--a math class--it became apparent something awful was going on as we heard the other tower had been hit by plane--this was no accident. Everyone was confused and not sure how to process everything.

Some years later I moved to New York and met people who actually had lost loved ones during the attacks of 9/11/2001. It was tragic and we should always commemorate the day. Some online have pointed out there is a bitter irony to how some of the same people wrapping themselves in the American flag today and talking about how tragic the deaths of 9/11 were are the same people saying the many, many more deaths from COVID-19 that could have been prevented with more Government action are, "Not a big deal." Both 9/11 and the impact of the pandemic on our country were caused by intelligence failures and those at the higher levels of power not taking necessary action. I don't say any of this to diminish how tragic 9/11 was, just to point out some people have a lot of cognitive dissonance and hypocrisy if 9/11 brings them to tears but COVID-19 doesn't. 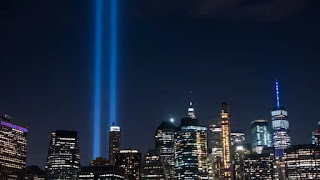 19 years ago we dealt with a horrendous tragedy. Almost 20 years later we are now in the midst of another terrible and tragic event. I mourn for those lost in 2001 and those lost now due to acts of terrorism then and the pandemic today. I just hope that we can come together as a Nation in 2020 the way people claimed we would back in 2001. We seem more divided than ever now, and that is one of the saddest things overall out of all this--the lessons we didn't learn.
Posted by David Charles Bitterbaum at 6:27 PM