After much teasing and a surprise ashcan (that was pretty good reading), Bad Idea has announced their upcoming slate of comics that'll launch in early 2021. I continue to be quite intrigued by this publisher and their unique ideas (direct distribution, no variants, etc.) so seeing that their upcoming comics look like they'll actually be really cool is encouraging. After all, if you have cool ideas but the comics suck why bother? Thankfully, all the announced books look pretty darn impressive.

There is the previously-discussed, "Eniac,"  about an evil supercomputer with issue #1 kicking things off in March of 2021. We've got the one that really caught my eye--"Tankers," which involves big tanks traveling through time to try and keep the Dinosaurs alive a bit longer to make more fossil fuel--it is clearly comedic in tone. Another neat title is, "Whalesville," which is an all-ages tale of a young child being eaten by a whale and discovering a magical World in its belly. Plus there is the horror-sounding title, "The Lot," with a film studio that has a dark secret (I'm also pumped for that one), and lastly a one-shot about Santa Claus going nuts, "Slay Bells." 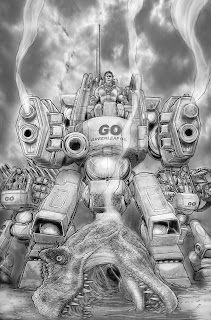 Every title will apparently be in interesting sizes (not just a standard floppy), be loaded with bonus features, have high-quality paper, and just cost $3.99. I'm very excited for 2021 when these all start coming out and continue to stand by my assertion that the way Bad Idea is doing things they are either going to be a smashing success or an incredible failure. I hope things go well though because these comics all look so rad.