Goodbye, RBG/Republicans Have No Shame 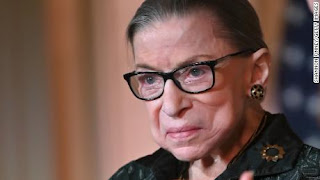 Ruther Bader Ginsburg was an amazing justice. Plenty of obits on the web break that down. I am sad she has passed. The Republican party, however, licking its chops, and less than 24 hours after her death Trump was tweeting about filling the Supreme Court vacancy. This is disgusting, and the hypocrisy is hilarious as Republicans said Obama couldn't fill a vacant seat as it was an election year when he had 200-ish days until an election.

Meanwhile, Trump's hopefully impending defeat is approaching this November and people like the horrendous Mitch McConnel want to jam someone into that Supreme Court seat before (I pray) losing their control of the Nation. Instead of being able to simply mourn this incredible woman, we have to fight against all kinds of nefarious forces. Republicans have no shame, they've lacked it ever since the big orange moron took power. Goodbye, RBG, you will be missed. We will try our hardest to honor you.