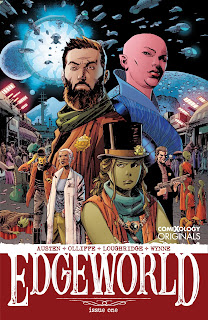 Chuck Austen is a comic creator whose work is often hated on. I'd say some of his stuff was actually pretty good, like his first, "U.S. War Machine," Marvel Max series, but I'd also admit he made some straight-up garage. He quit comics more than a decade ago, working on various television shows and I'd assume doing other hobbies that didn't get him constantly mocked by comic fans. Well, he's decided to return!

Yes, Chuck Austen is going to have a creator-owned series on ComiXology titled, "Edgeworld," which he'll be doing with illustrator Patrick Olliffe. Olliffe is someone whom Austen met back in his Marvel days and they'd had this idea for a bit, it seems. Austen admits in the press release for the comic he'd outright left comics, but he and Olliffe decided, "Why don’t we create a comic for ourselves? Just for fun?’ One rocket-sled ride later, and here we are. We never created this to sell to a publisher. We created it to create and that was very freeing.” Austen is basically saying off the bat to save your criticism because he's heard it all and this is just something he did to have a swell time. I say good for him.


The comic itself is about a character named Killian Jess, a former intergalactic soldier turned magistrate who works to protect the planet Pala with one of its native beings, Cheela--so it's like a police procedural, kinda? As someone who has actually been fond of some of Austen's writing, I wish him the best with this new project and hope it both does well and is--you know--good.
Posted by David Charles Bitterbaum at 10:40 AM