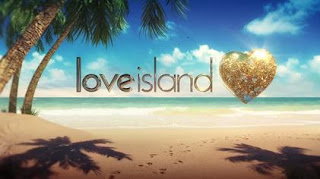 Let's be honest. As much as I enjoyed the first season of Love Island, it was pretty mellow. I called it, "Deliciously chill." There wasn't a ton of drama and it lacked a good deal of raunchiness you'd expect a show with a title like, "Love Island," to sport. Yes, the American version of the show was always going to be tamer than the original UK version seeing as Americans are a lot testier about sexy subjects. Still, things were quite PG. Season 2 started out a little slowly, but once they introduced a, "Casa Amour," twist (more on that later) things quickly got deliciously dramatic as well as quite hot-and-heavy in regards to the show's focus on good ol' fashioned making-out.

For those unaware of what, "Love Island," is all about. Basically, a bunch of singles come to an island, are coupled up, and from there sparks fly (metaphorically) between zany challenges. Due to COVID-19 there isn't an island this season so much as a rooftop in Vegas (which the show outright says, "Don't get too hung up on the island part,") and a bunch of singles who had to sit in quarantine for some time and don't go on dates too far away so much as within other levels of the hotel they're at (like a nice dessert bar). COVID-19 has resulted in some limitations, clearly, but we've still got horny singles and hilarious announcer Matt Hoffman so let's just call a rooftop an island and enjoy ourselves!

Speaking of enjoyment, things were slow at first. Everyone was kinda feeling the scene out, taking it slow, and besides one guy who was really toxic and went home fast, things were bland. Then we had the Casa Amour twist. The girls stayed at the one, "Island," villa and the guys were sent to another villa atop the roof of a different hotel. Then a bunch of new ladies came and met the men at their temporary home and a chunk of dudes came and introduced themselves to the women still at the villa. That's when lots of crazy kissing and dry-humping occurred, with the guys and gals both feeling, "Some type of way," when they returned to the villa with new matches or wanted to resume their relationships but had to confess to a lot of smooching and grinding with other people. Yes, this show is a just a bunch of amorous 20-somethings getting all upset their boyfriend/girlfriend of a week is now with somebody else after a day or two, but its lovely trash, and this season has ramped-up everything fantastically.
The American version of, "Love Island," isn't as saucy as some other versions, but it still is a good time. It isn't a literal island this season either, but I'm having fun, the, "Islanders," are having fun, and announcer Matt Hoffman is having a grand time making fun of all the crazy events too. It is on almost every night of the week too so its like a nice relaxingly-dumb way to end the day. In the garbage fire that is 2020 I'll take what I can get, even if it is a show called, "Love Island," that isn't on an actual island.
Posted by David Charles Bitterbaum at 3:42 PM