When Your Mini-Series Has a Surprise Crossover 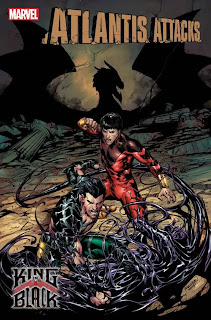 The, "Agents of Atlas," comics have been in various mini-series lately that are chronologically linked but have different titles somewhat confusingly. The most recent mini-series with them has been, "Atlantis Attacks," which due to COVID-19 was of course delayed with many other books (the comic industry shut down for a bit). The book will soon be back on track, however, and the fifth issue surprisingly ties-in with another upcoming mini-series/event, "King in Black." That is an upcoming big ol' event with the evil God of Symbiotes, Knull. This is interesting and reminds me of when a, "Captain Marvel," mini-series was a part of two events, in a strange way.

During Marvel's, "Civil War," comic there was the surprise reveal that the original Captain Marvel had time-traveled or something and was alive, but still ill with the cancer that took his life back in his comic in the 1980s. Then, he got a mini-series about being back amongst the living, but thinking something was off. The mini-series did not solicit it at first, but there was a surprise reveal he was actually a Skrull sleeper agent for, "Secret Invasion," the mini-series that came a bit after, "Civil War." He did not realize he was in fact a Skrull and it was a shock to readers seeing this too. It was pretty clever, and led to him fighting against the Skrulls even though he was one and telling Marvel Boy to try and be Captain Marvel in the pages of (I think), "Mighty Avengers," when he ended-up drying in combat and indeed reverting to Skrull form. 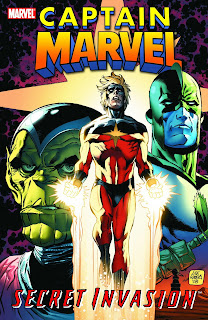 It is always interesting to me when a comic ends up linking into another that it at first seems completely unrelated to. When it is an editorial mandate it can seem hamfisted and unnecessary, but at other times it works quite well, as with, "Captain Marvel," and hopefully coming up in, "Atlantis Attacks."
Posted by David Charles Bitterbaum at 8:26 PM