A Surprise Release of, "The Hero Trade," #1 from Bad Idea 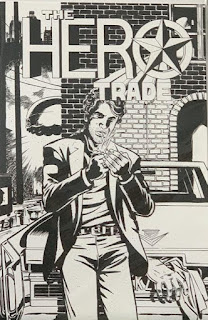 I continue to follow new comic publisher Bad Idea with great interest as they advertise their upcoming books and how they are being directly shipped to comic markets in the near future. But wait, they surprise-released a comic already? Yes, "The Hero Trade," by Matt Kindt and David Lapham was sent to stores that will be distributing Bad Idea comics with a random note about how it was an ashcan of an indie comic (the creators weren't named and there was zero indication it related to Bad Idea as well) and more could be ordered of the little ashcan that was sent by September 13th. Then, after that date, Bad Idea revealed this random mailed comic was actually a surprise drop from Bad Idea.

This surprise release has gotten the comic a lot of buzz. Some people are saying it was a very clever way to build some hype, others are saying not revealing the truth until it was too late for stores to order more copies created artificial demand and was a...well, they said it was a bad idea, something the company probably loves hearing as that is their name and they're doing some crazy stuff. I continue to watch them with great interest.
Posted by David Charles Bitterbaum at 9:25 PM