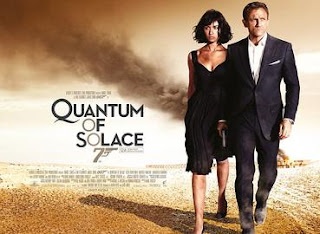 I saw an article on that served to remind me and make me want to remind others, "Quantum of Solace," is a great movie. The least-respected of the Daniel Craig movies where he plays James Bond, it often is forgotten or considered mediocre. This saddens me as its opening scene is amazing, and Polyon's article about how its villain is pretty darn great further shows why this is a solid flick. A bad guy who doesn't have a crazy weapon or weird physical ailment, he just is a rich and wants to control a country's politics via his billionaire economic influence. It is ahead of its time with so many villainous billionaires our World has now who seem to want to control everything.

I know everybody loves, "Casino Royale," and, "Skyfall," with mixed opinions about, "Spectre," but I get exhausted seeing how little love, "Quantum of Solace," receives. If you haven't seen it, check it out, and if you did see it years ago and dismissed it, I request you give it another chance. With the heavily-delayed, "No Time to Die," finally coming-out soon (and hopefully it'll be available to safely watch on-demand and not just in theatres) now is a good time to revisit all the solid Craig-as-Bond movies, frankly.
Posted by David Charles Bitterbaum at 1:31 PM