I'm Surprised it Took This Long for, "BRZRKR," to be Optioned 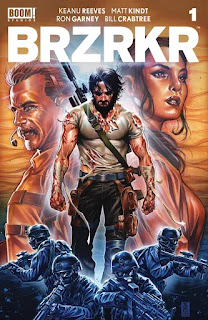 When it was announced that Keanu Reeves would be co-writing a comic with Matt Kindt titled, "BRZRKR," I assumed before even the first issue came out it would have a media option announced. I was wrong, it took until after the first issue but before the second. Yep, "BRZRKR," a comic about a man who can't die and is working with the government as a violent secret agent in hopes of finally becoming mortal will be a movie and spin-off anime series on Netflix.

One thing that is being heavily overlooked in all this is how while the comic's story was perfectly fine and might make a decent flick, the artwork was actually stellar. Ron Garney did the illustrations for the first issue (and upcoming issues) or, "BRZRKR," and he's been around long enough (getting work published since the 90s) that he knows how to draw everything from the explosive and extremely violent action sequences to the quiet flashbacks as our protagonist remembers the day of his birth 80,000 years ago--he is basically immortal and is able to remember a lot, you see.

The media articles about, "BRZRKR," getting optioned maybe have somewhat ignored Garney's contributions, but they sure seem excited to see another Keanu Reeves project. This is fair as he is a great actor, but I will admit feeling a little cynical these days when a comic seems to be made as little more than a proof-of-concept pitch for a potential movie/television show/etc. I don't mind stuff being optioned and there are in fact things I wish would get optioned. This, however, was destined to get bought for the screen before a single word was written or pen was put to paper (or tablet, you know what I mean). The comic wasn't bad by any means--as I said, Garney's art is amazing--so I imagine the movie and anime series will be fun. It still doesn't make me any less cynical though.