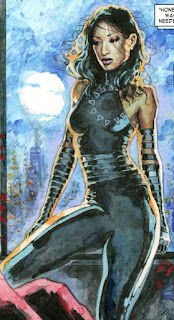 Echo is the superhero name of Maya Lopez. She was first introduced in the, "Daredevil," comic series back in the 2000s. She is a Native American and deaf. She also is great at kicking ass and is apparently going to appear in the upcoming Disney+ show about, "Hawkeye," before getting her own spin-off show. This sounds cool as while Daredevil isn't in the Marvel Cinematic Universe yet, this means he may appear. Plus, Echo has hung-out with Hawkeye some and my favorite character, Moon Knight. Moon Knight has his own show coming, of course, so I wonder if she'll appear in that too?

A lot of this pure speculation at this point, but it seems quite likely she is actually getting a show. This makes me excited as she's always been a neat character and one of her co-creators, David Mack (he created her with Brian Michael Bendis), is one of the nicest guys you'll ever meet in comics. I'm glad a character he was involved in making is getting some MCU-spotlight. It'll be a while before we get these shows, but it is fun to hear what's in the works already!