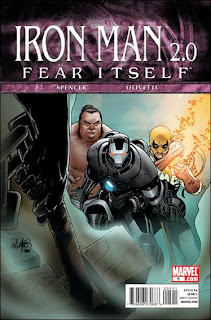 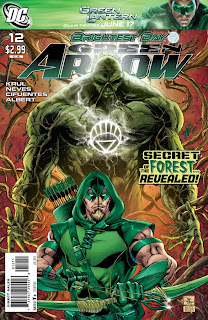 Green Arrow #12 AND Iron Man 2.0 #5
These comics are how you do not do event tie-in comics, and for different reasons that result in them being the same less-than-enjoyable level of quality. Let's be like MC Hammer and break it down. Now that is one dated reference.

Green Arrow, that comic I'm not too upset about. It's been pretty much eleven issues of nothing happening and this issue is more of that. The thing that bugs me is that it is Ollie commenting on the events of the main Brightest Day book with him pretty much watching it happen off-panel. So watch him watching it. Yeah, that sucks. Don't show us that, show us the aftermath or something...oh wait, you do, and its utterly pointless with him just walking back into Star City even though I thought he was banished forever or something melodramatic in a comic by the exact same writer as this one--J.T. Krul. Krul will be be doing the Green Arrow series after the re-launch of DC titles, I will not be interested in that and be on my merry way, thank you. 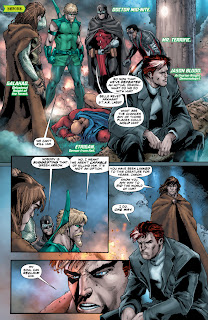 I expected more from you, Iron Man 2.0! You were so interesting with your plot about that Palmer fellow, and in this issue you just lurch awkwardly into Fear Itself with little explanation of why and just brush off all the other plot points you had been building up the previous four issues with some quick asides before then launching off into something involving Iron Fist and the eighth city which is actually hell and those weird hammers or some other nonsense. Really, what happened here? You had such a good tale going and then like a car cruising along through a story-telling intersection an editorial mandate came careening through and t-boned you off the road into this complete switch of focus. I want my James Rhodes/War Machine out solving the earlier issues' mystery, not dealing with this disappointing event it has to tie-in to. Nick Spencer is the new darling of Marvel, with his exclusive contract and whatnot, couldn't he have just told them no, "I'd rather keep the story I'm actually doing," instead of this? Hrm. Two comics, neither of much quality while also not being outright terrible. They stand as good examples of how event-related comics shouldn't be done. Heed the warnings they bring.
2 out of 5 stars (both).
Posted by David Charles Bitterbaum at 10:00 AM