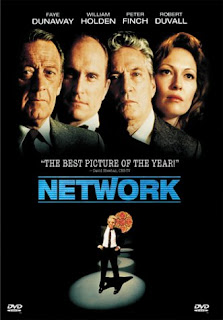 Network
We live in a world where people don't read books or newspapers, they get everything from the television (or internet, but forget that for a moment). A world that isn't really about nations such as the United States or China, but instead the united conglomerates of Microsoft and Exxon. Our news isn't about delivering objective facts anymore, its about getting good ratings with crazy people yelling things and trying to whip the public up into a frenzy of easy-to-shout slogans. This all is no big deal  to say now, but imagine how far-fetched this would have sounded back in 1976 when Network came out. That makes Network not only a really dark, clever comedy, but also an incredibly eerily accurate predictor of what was to come. Plus, it's just a great movie.

Network is about a lot of things. On the human level it is about a friendship between two men named Max and Howard that becomes strained when Howard starts to essentially have a mental breakdown--but in the process becomes a huge news hit. Network is also about the sensationalism the news started to resort to more and more as time went on, and the very dehumanizing effect things like the mass media and corporations have on our lives. Oh, and it is wicked funny.
Actor Peter Finch won the best actor (in my podcast I incorrectly said supporting actor) Oscar for Network, and it is clear why--he is absolutely brilliant in his portrayal of a man beaten down by life who suddenly either goes insane or has an epiphany (maybe both) and upon declaring, "I'm mad as hell and I'm not going to take it anymore!" becomes one of the most popular newscasters in America. Sadly Finch wasn't able to accept the Oscar as he was the first ever person to win it posthumously (Heath Ledger is the 2nd person to win an Oscar after passing), but we were lucky to have him alive long enough to grace the film with his amazing performance in this film. Network would not be the same movie without Finch.
Network has other great actors turning in stellar performances too, from Faye Dunaway as the new hotshot executive at the television company, to William Holden as the other main character of the film, Max Schumacher. Robert Duvall also is great as the cold-hearted company big-wig. Everyone shines in this film and the pitch-black humor comes through expertly with almost everyone playing a character who's sole interest is to be on top (excluding Holden's Schumacher, who we identify with, and Finch's Beale, who we both pity and are amazed by the sheer craziness of). As the film goes on its just gets stranger and wackier, with Finch's Beale descending deeper into madness and everyone else getting more and more predatory until the films eventual hilariously twisted conclusion--I will say that the narrator's last line of the film (which I won't spoil) is my favorite of the entire flick.
Network is a wonderful movie. As just a regular tale of how greedy and cruel people are it works, and as a story about the inner-workings of the news it also is interesting. The way it predicted how our media and culture would operate today, though, adds a whole new fascinating layer that is both at once creepy and fascinating. This makes the film even more worthwhile to watch. Plus, as I said, it has some outright hilarious moments. Don't miss this movie, it's a winner.
5 out of 5 stars.
Posted by David Charles Bitterbaum at 6:00 PM