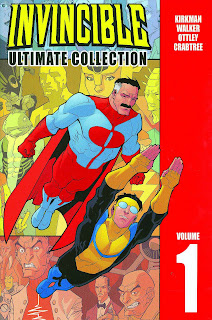 Invincible Ultimate Collection Volume 1
This series has been going strong for some time and is quite good. I like this collection because it collects all the issues up to the explanation of the big twist that gets hinted at in earlier issues and sets up the new status quo that the later issues built from, so really, this is an "Ultimate" collection in that it provides the perfect introduction to the series for a reader like me who has never read Invincible. I know, it's weird considering all the junk I read, but I never picked this up until now. How was this? It was really good, but probably the most interesting, touching, and sad part was the relationship between Mark and his father.

I'm going to spoil the big twist in this series, its been out forever so really, what's the big deal? The twist is that Invincible's father, Omni-Man, turned out to in fact be a villain who was an alien from another planet as he told his son, but wasn't a peaceful guy, he was in fact the first of an invading force. That makes everything in the earlier issues kind of a lie, which is both cool and sad. It also is clear how Mark's dad tries to tell him, but just can't because he knows his son loves the planet Earth. The bond they seem to develop as a father-son super-hero team is genuinely touching making the betrayal Mark feels all the harsher. Oh, there is a bunch of other stuff that happens in this series, but I figure you probably already know all of it or can just look it up because this series has been coming out forever from Robert Kirkman. Yeah, there's fun little meta-comments on comics, neat action, romance, humor, etc. but the thing that stuck out most to me was the father-son dynamic you don't see in other comics. 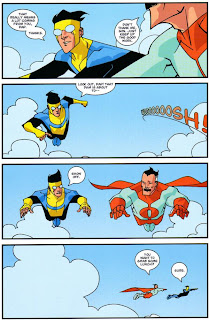 Maybe I noticed this because so many heroes seem to be orphans or only have a grandparent or something. Batman lacks parents, Spider-Man just has Aunt May, Superman had adopted parents, but neither had powers, and so forth. Basically this comic creates a cool concept with a dad and his boy fighting monsters and crime and also just being a happy, sweet family. No weird dysfunction, just a good family that happens to have powers. I found it nice, making that twist (which I knew was coming because I did have a general idea how this series went) all the more gut-wrenching when Mark and his dad fight and argue. This series of course later became about Mark trying to be a hero, but these first 13 issues really seem to be mostly about a father and son and their adventures--with a bit more emphasis on the son's adventures. The mom is nice too, but is mainly there to serve the plot. 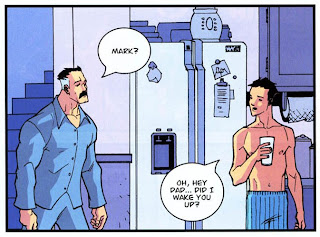 People have written a lot about this comic, so I picked one particular thing to focus-in on for my Flashback Friday segment, mainly because I found it interesting and would say it took the comic to a higher level. It was an above-average comic and that made it a great comic. Yup.
4 out of 5 stars.
Posted by David Charles Bitterbaum at 10:06 PM