Let Me Get This Straight--Archie Comics Has The Most Well-Balanced Gay Character? 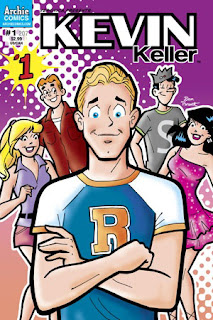 Let me get this straight (no pun intended, I do this segment all the time), but Archie comics, the company that does pretty tame and I suppose you could say "conservative" comics is doing their four-issue spin-off mini-series about recently-introduced gay character, Kevin Keller, and he is more realistic and well-balanced than arguably any other gay character in comics? He isn't stereotypical or cliche? He isn't used just for jokes? They don't just use the fact that he is gay to do a lame story with a message about acceptance as many comics seem to do (although one of the stories is about how he came out in the first issue of this mini-series)? He's just a regular well-rounded guy who happens to be gay, and Archie comics are the people publishing this? I mean, he does have a schtick like all Archie characters do, with Reggie being a jerk, Veronica being a rich snooty pain-in-the-ass, Betty being a push-over, and such. Kevin is able to eat a lot of food just like Jughead and they often make it a competition, and this comic has a story about that. Still, Archie comics?

Marvel and DC at times seem to have trouble trying to utilize characters that aren't white, straight, males. They've gotten a bit better with heroes who aren't males, sometime are better with those that are of color, but when it comes to anything but heterosexuality? Yeah, there are some issues. It seems so many of the heroes who are gay are defined by nothing more but their being gay; its boring, lame and the only time they are used is for when a story is needed about acceptance of being different. Yeah, its a shoddy way supposedly being more open about things while actually just ghettoizing your characters to certain stories and having only one defining characteristic. Things have gotten better, after initially botching her introduction during, "52," DC seems to have a Batwoman book finally on track after countless delays and she is a well-rounded individual who happens to be a lesbian, but there is still a long way to go. That is what makes it so interesting that the company that seemed to be stuck in the past is suddenly looking very forward-thinking with their comic focused on what is quite possibly the most realistic gay character ever. What makes him so realistic? Archie comics remembered that gay or straight the character is a human being.
Posted by David Charles Bitterbaum at 12:00 PM

Email ThisBlogThis!Share to TwitterShare to FacebookShare to Pinterest
Labels: comics, Let me get this straight, Sexuality