That Was Actually Really Good? AKA Tarot: Witch of The Black Rose #68 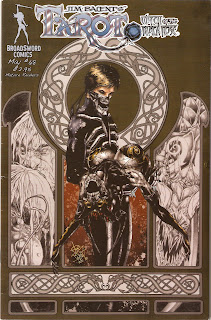 Tarot: Witch of The Black Rose #68
I admit I read Tarot more as a guilty pleasure, having started reading it so it could be used during a college project on the portrayal of female sexuality in comic books (it was an example of the paradox of a T&A comic with a bunch of female readers), so imagine my surprise when this issue comes along that shows when Jim Balent stops drawing huge breasts for a moment he actually can draw something...well, something pretty good.

This issue essentially consists of the Skeleton Man AKA Jon, Tarot's boyfriend, fighting this huge monster called, "Jormungand," or, "The Midgard Serpent." After it eats Tarot's mother (eh, never really cared for her, so not a big deal) we get a bunch of pages that are actually really well drawn of Jon and the serpent fighting. It's just good comics, a super-person and a huge monster fighting with the artist doing a really good job showing the action--because when Balent isn't drawing horribly disproportionate women he actually has some genuine art chops. After that, Jon discovers Tarot is dead (not really a spoiler as the comic cover has him holding her dead body) and we get some more good action of frost giants getting hit over the head with a super-powered hammer. To top things off, Balent actually writes some good dialogue this issue, with Jon pointing out how mankind has gotten to a point where its questionable whether we really need something like, "Gods," interfering in our lives, which was genuinely interesting. 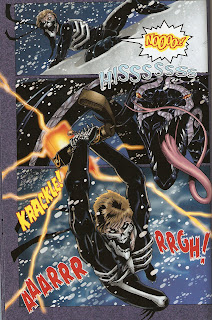 Who would have thought I'd say so many positive things about this comic, Tarot? I mean, I'll be damned, we get some great art, good writing, and pretty much no gratuitous T&A--this was just some good stuff! Of course, probably the next issue we're get Tarot's sister Raven, whom Jon is now supposed to rescue, all nude or something absurd to counter this issues genuine enjoyablity. Yes, I know enjoyablity isn't a word.
4 out of 5 stars.
Posted by David Charles Bitterbaum at 4:30 PM