Well That Was Subpar--Ghost Rider #0.1 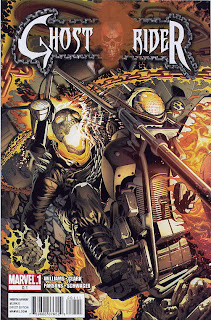 Ghost Rider #0.1
Consider me disappointed. This starts out decent enough, with Johnny Blaze giving us a fun run-down of why he is not like any other heroes, has him mocking Fear Itself when he sees it on television, and otherwise seems like a good time, even if it isn't going to measure up to the amazing run Jason Aaron had which was just stellar right out the gate. However, it gets weaker and weaker.

Biggest problem we've got here: Johnny Blaze comes off as even more of a jerk than usual, which may be because writer Rob Williams is trying to set up Blaze's hugely dick-ish decision at the end of the issue, but I still don't like it much. Also, that decision which makes Blaze pretty much a villain is that he'll pass the Ghost Rider curse onto someone else he's never met in exchange of being rid of it finally and getting to be normal. Huh, all these years Blaze had been pretty cool with having the curse of the Ghost Rider or at least not wanting to make someone else bear it, but suddenly over the course of one issue he'll just give it up for no apparent reason other than it may as well be the turn of someone else? That's some sloppy writing that just serves to make Blaze look like a total jackass and idiot. I guess next issue--which is technically the "first" as this was just a .1 ( and starting to feel like the lamest Marvel stunt ever) it seems we'll have a female Ghost Rider, so that will possibly be interesting/maybe not appeal to me in the slightest. 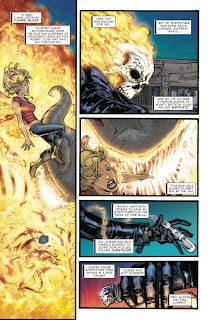 This looked pretty good, started out fine, but boy did it tumble toward the end with my not liking it more and more as I continue to think about it. Maybe I'll flip through the first so-called real issue but this does not inspire my confidence in a new Ghost Rider series. Maybe I just expect too much after what Jason Aaron did.
1.5 out of 5 stars.
Posted by David Charles Bitterbaum at 2:34 PM