June 2011 Previews--Parade Of The Awful

There is the good in Previews, and then there is the stuff that just makes you shake your head in shame and/or sadness. These items are the latter. Not a ton to mock this month, but of what there is, hoo boy... 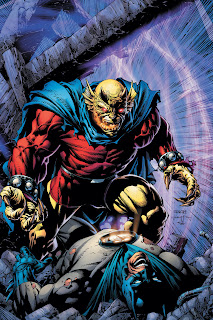 Pg. 95, Batman: The Dark Knight #5
I don't mean to beat a dead horse here, but David Finch gets out exactly two issues of this series with his art, then they have to get a fill-in artist (Jay Fabook) for a title that was created for the sole purpose of giving Finch something to draw. Then, DC announces their line-wide relaunch coming up in September and they are going to re-start this book too with a new first issue despite it looking like we may barely get to three at this point? Plus, they still claim Finch is going to write and draw this new series of the same name? Wishful thinking DC, wishful thinking. 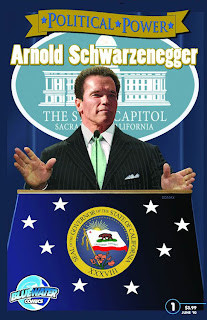 Pg. 242, Political Power: Arnold Schwarzenegger
Never one to miss the opportunity to make a buck, shameless comic company Bluewater comics are offering their old bio-comic about Arnold Schwarzenegger for sale again now that he is back in the press due to the huge scandal of his having a love child he fathered a shocking 10 or so years ago and was able to keep secret for so long. I like how the solicit says we can, "Experience his climb to the top," because Bluewater was too cheap to draw a few new pages where we, "Then feel his fall to the bottom." That last quote I made up. Yeah, I should create my own disreputable comic company! 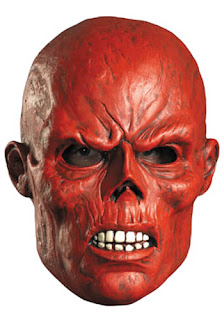 Pg. 367, Captain America Movie: Red Skull Deluxe Mask
This seems like it makes anyone wearing it look more like a severe burn victim than the Red Skull. 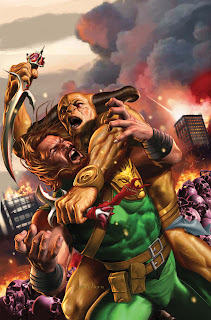 Marvel Book Page 10, Herc #6
My problem is not with this comic itself at all. Greg Pak is a great writer. No, it is this hideous cover by Greg Horn, who is really bad at drawing pretty much anything but suggestively-posed women (kind of like Ed Benes!) and really just makes uncomfortable with this image of a creepy goat-man who has a weirdly aroused look on his face. Yeah, no thanks. Marvel Book Pg. 16, Ultimate Fallout #5
Try to keep up because this is as confusing as it is sad. Jeph Loeb was writing Ultimate X but it was horribly delayed to a point where issue #4 came out about 8 or so months late. Marvel is getting ready to re-launch the Ultimate Universe again after Jeph Loeb did such a horrible job on Ultimatium, along with the fact that the current Ultimate books along with Ultimate X aren't selling too hot. Some of the plot points of Ultimate X seem to be important to this re-launch, but it is so behind, that Nick Spencer is going to just rush these story-lines to a conclusion in the mini-series meant to start-up the new line of Ultimate comics, Ultimate Fallout. Don't believe me? Look at the above image of characters from Ultimate X on the cover of this Nick Spencer-penned comic. Yeah, Jeph Loeb and artist Art Adams were so damn slow Marvel took their toys away and gave them to Nick Spencer to quickly clean them up and put them away for the next playset Marvel wants to put out. This has got to be one of the stranger things in comics lately and shows that if you're too slow Marvel editorial will shove you out of the way and put someone faster on the job. I'd hate to be an old lady driving ahead of Marvel on a busy highway.

There we go, the things that deserved a good drubbing have been pointed out and hopefully if you were thinking of buying any of these items now you know better.
Posted by David Charles Bitterbaum at 2:30 PM