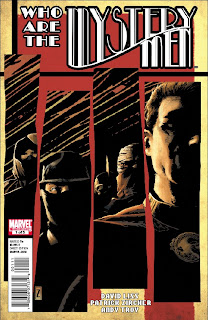 Mystery Men #1
Marvel promoted this in a cagey-manner, using "classified" solicits and otherwise being secretive for what is pretty much just a neat little pulp-style romp set in the normal Marvel Universe before the era of heroes began. It's definitely worth reading, however.

I really liked this. We get some all-new characters, as Marvel doesn't really actually have any pulp characters, (The Angel, maybe?) and we have the classic tropes of the depression, evil mystical monsters, and some twists on the usual pulp story-type by having a man of color as one of the main characters. You see, back in the 1930s when actual tales like this came out it was all white guys and the only time you saw minorities was as the stereotypical side-kick or a villain (a cliche evil Asian fighting our "proud Western hero" during the quote un quote Yellow Scare). This will introduce some intriguing story possibilities. 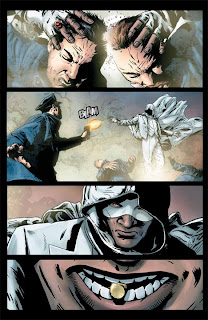 The main plot is that an evil General is setting up something twisted that will hurt America, has murdered Dennis Piper's love, and Dennis Piper is being set up to take the fall for it. The thing is, Piper is also the thief, The Operative, so he knows a thing or two about escaping from the police and breaking into places to try and figure out just what is going on. There's a bit more to the story, but I won't spoil it all, and the artwork is snazzy, showing action well and working effectively for the creepy moments. 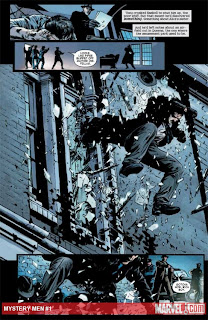 This was really fun, even if it isn't yet quite clear how it ties in to the Marvel Universe much, which doesn't bother me, I just wonder why they chose to make it take place in the main Universe. In a text piece at the end writer David Liss says for readers to keep their eyes open for references so I will be doing that, and for all I know this could have important ties to the normal Marvel Universe that continuity freaks will lap up, so we will see. Anyways, this was good, I'd recommend it if you like the pulp tales of old but want some twists on the formula.
4 out of 5 stars.
Posted by David Charles Bitterbaum at 3:00 PM