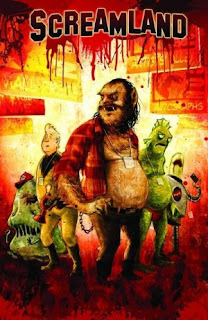 Screamland #1
The first issue of the new ongoing coming out of the couple-of-years old mini-series. Is it good, can you understand it without having read the mini-series? Read my review and find out, why don't you?

This was entertaining. It explains the concept of these monster-looking individuals existing in the real-world and just trying to scrape by with a living from movies but having been replaced by CGI and young actors who are human but get makeup to look scary (love the swipe at the Twilight movies). Do you need to have read the mini-series to understand this? No, you should be fine, but the mini-series was really good so you should definitely check that out. This isn't quite at the level of the mini-series yet, but the mini started out a bit slowly so I'm not too worried. We have Carl the wolf-man from the original mini and his agent but everyone else is new, so they seem to be starting pretty fresh with this series. It's fun, and the plot is humorous with washed-up monsters being afraid of total embarrassment when one of their colleagues threatens to show a questionable videotape--with a mystery beginning at the end that will probably form the basis for this arc. It was good stuff, and the extra segment at the end through the eyes of the invisible man was pretty cool and made the otherwise kind of awful-seeming guy a bit more understandable. 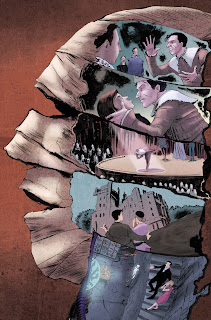 This was fun and the concept of monsters living in the real world but just trying to make an honest living is a great idea. I look forward to seeing where this goes.
3.5 out of 5 stars.
Posted by David Charles Bitterbaum at 2:04 PM