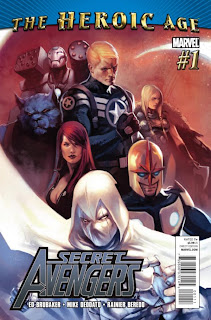 Secret Avengers #1-5
It's the first five issues of the comic that was written by Ed Brubaker before some other folk were announced as coming on to write it recently. Yeah, it isn't that old, but let's just roll with it.

This was some odd stuff. A black-ops team of Avengers that..goes to planet Mars and proceeds to fight an intergalactic threat. Okay, not what I have in mind when I think of a top-secret Avengers team, but this is fun enough that it actually kind of works, even if my beloved Moon Knight barely gets any "screen time" after the first two issues. Steve Rogers has the team fight these evil people who seem to have Nick Fury working for them (which is explained in my favorite issue of this bunch, the fifth, but more on that later), and the team chemistry is interesting with this odd mish-mash of individuals put together and told to function as a group whether they like it or not. I mean, War Machine, Ant Man, Beast, Moon Knight, some Thor-comic lady, and others? That's just an strange but fun combination. Kind of like chocolate and licorice. 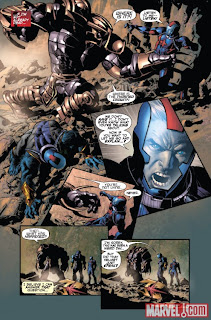 I actually enjoyed things the most during the fifth issue when all this Mars business is wrapped up and we learn that the supposedly evil Nick Fury is a robot that gained the ability to think for himself/itself that has since been causing all sorts of trouble. It's a cool "I Robot" sort of thing and is illustrated well. It still wasn't too fascinating though and despite these being perfectly competent comics I just didn't have too grand of a time, which is sort of why I stopped reading the series with this issue. 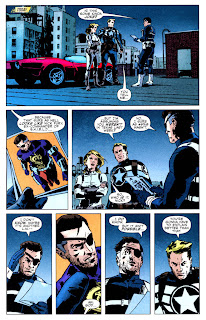 I'm pretty sure I'll be picking Secret Avengers up again once Warren Ellis takes over just to see what insanity he brings, but while these early issues were of a great quality with fine writing by Brubaker and pretty good art by Deodato in the first four issues (and a mixture of folk in the fifth), I just had an above-average time. Other people maybe will have enjoyed this more, but I don't know, I'm just somewhat entertained, like at the same level of someone who saw a summer-flick and went away feeling they got their money's worth but not much else. I guess I prefer Brubaker on his more noir-type work.
3 out of 5 stars.
Posted by David Charles Bitterbaum at 8:36 PM