New Mutants #25 AKA NowThat's How You Start A New Storyline! 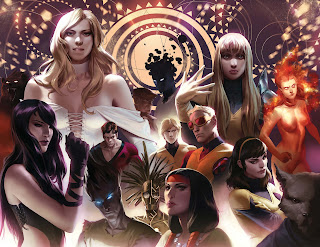 New Mutants #25
In this issue of New Mutants the team fights a futuristic robot-piece of equipment, talk about some plot points from a mini-series I didn't read and that Age of X event I should read, and some other deck-clearing occurs that I don't really care about because the interesting stuff happens in the last third of the book that I am now going to talk about. Why? Well, because that is when Cyclops makes a cool meta-point and Nate Grey shows up and kicks ass. Oh, and I'm going to swear more than usual and be silly because I love Nate Grey and he gets me excited.

So the sister of  Colossus, Illyana, has those demon powers and Cyclops is going to be a huge dick and keep her locked down on X-Men's island because she endangered reality or something during a mini-series that barely tied-in to an event I didn't read either. Yeah, I don't give a damn. Sam Guthrie is feeling all emotional after being in the Age of X reality but still wants to get all romantic with Dani sometimes. Hm, this is the sound of me not giving a shit. So far we've had a perfectly competent comic full of characters and stuff I don't care about...but wait! Cyclops is not a total idiot, he is actually smart and realizes the X-Men often move on from conflict to conflict and need someone to go back and tie-up loose ends. Wow, a bit of clever meta-commentary. Take it away, Summers: 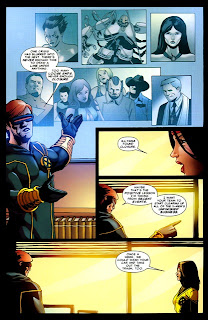 Okay, now you've got my attention. What is the first mission for the team? Find Nate Grey, the X-Man and bring him home? Oh. Hell. Yes! At this point we cut to probably the best part of the comic, 8 pages of Nate Grey awesomeness. It seems he is trying to figure out how to get home before an interruption... 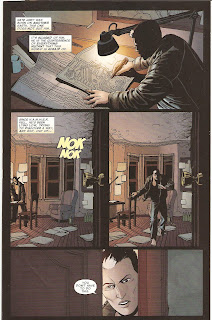 At this point we go into some awesome fight-scenes of Nate Grey kicking everyone's ass, from Iron Man to Thor. Why? Because Nate Grey fucking rocks, that's why. I want you to buy the comic so I'm not going to show you everything...but I'll show you the page right after the above one to give you taste... 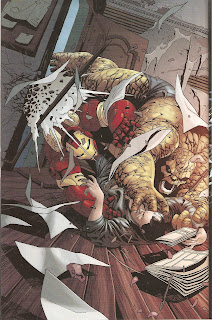 "Wait, David! I thought Nate Grey was locked up in a Hammer base or something due to the end of that Dark X-Men mini-series?" Well, to you I say, "Shut the fuck up, you big spoiler-alert," and I also say, "Just wait for the reveal on the last page that shows we are in for some interesting stuff to come in this series." Yeah, the last third of this comic turns it from something that is a bit above-average into something quite awesome with the meta-commentary and sublime moments of Nate Grey. I didn't read New Mutants before this issue, but I'm going to be picking it up now.
4.5 out of 5 stars
Posted by David Charles Bitterbaum at 5:00 PM