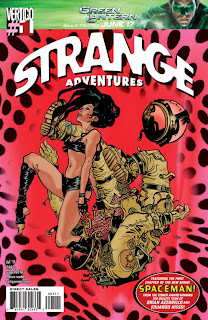 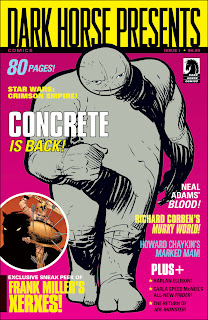 Dark Horse Presents #1 AND Strange Adventures #1
Two different anthology comics from two different publishers. Both are $7.99, and both have some really great tales and some so-so ones (which is how anthologies usually are). I'm intrigued these companies are doing this as apparently anthologies aren't the biggest sellers, but I'm also pleased as both of these comics definetely had some stories that were keepers. I am now going to go heavily in-depth about each book, jumping between them at will and otherwise confusing the hell out of you, my dear reader. Oh, I'm also going to be a wise-ass for the stories I don't like, so you might laugh too.

First off, don't ask me which comic I liked more, I'm going to spoil things for you and say each comic gets the same score from me at the end. The thing is, Dark Horse Presents probably has more okay stories and few amazing ones, and Strange Adventures has more stories of a high quality overall--resulting in the same average score, but through very different methods. One problem both comics have with their one-shot tales is that they often resort to a common trope of short-stories (be they in comic form or prose) in that they have a big twist ending that sometimes you see coming from a mile away, and other times don't anticipate, but still have to put up with. Many short stories do this so I'm used to it, but the tales that don't resort to this over-used element are a bit snazzier in my mind. The tales that will be continued don't have this issue, but then the question is if the first part makes me interested enough in what part two will bring. Anyways, let's look at some stories.

The first thing in Dark Horse Presents is a story about a guy called Concrete who is sort of a hero but more just a nice guy who lives in a neighborhood and is made of concrete. It's a fun little tale but not amazing, with the usual, "They stumble upon the real crime" cliche many tales have, but I liked it well enough. 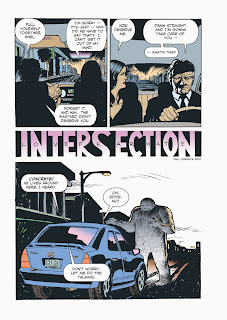 Then we have part one of, "Marked Man," which is about a thief and his friends. It's illustrated and written by Howard Chaykin, so it looks nice, but I really don't give a damn about the story as it seems to just be the usual criminal caper yarn. Then we have a comic setting up a big fight with this vigilante known as Blood who is an alien or something. I don't know, it started out seeming to be about gangsters then lost me when it brought in the whole space-creature angle.

Over in Strange Adventures we have something about tattoos and long-lost relatives or other bullshit that seemed promising but was dragged down by the most hackneyed ending possible. Then there is a comic called, "The White Room," which also has a twist, but it's more like a twist-within-a-twist so that was really cool and I quite liked this tale about disaffected youth and their love of technology (clearly an allegory for today, of course). 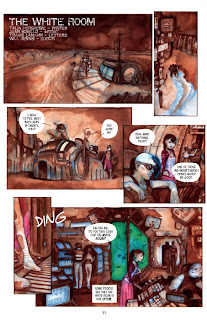 After that we get our first story in Strange Adventures that seems set in the present day about two youth, one of whom...well, I don't want to spoil it, but I'd say this story has a killer hook and I also really enjoyed it. Following it is, "All The Pretty Ponies," which seems to just be the usual tale of rich folk taking advantage of the poor with a twist of people getting screwed over etc. etc. However, a little monologue at the end about if this is all just a dream within a simulation within a dream was kind of cool and reminded me of Inception so that made the story perk up at its close. 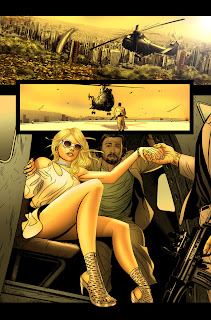 Back over in the Dark Horse book we have a funny little tale set in the "Finder" Universe of comics that I enjoyed involving crime, delivery people, and trying to find happiness. It was cute. 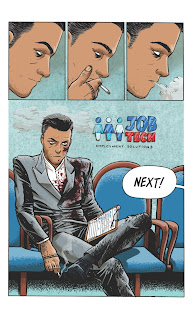 Continuing on in Dark Horse there's a silly little tale about a hero named "Mr. Monster," fighting this huge tree-villain that is made to look like a comic from the old days (I cracked a grin or two reading it, but otherwise it's quite disposable), and an interview with Frank Miller about his upcoming Xerxes book along with some art as a sneak peek. I could care less about Xerxes as while 300 was great as a mindless action movie the more you think about it the more it is kind of racist with the super-cool white dudes fighting the evil dark-skinned people. Yeah. That doesn't matter though, because after that junk we come to my favorite piece of either comic, "How Interesting, A Tiny Man." The thing is, this isn't a comic really, its a prose piece that has a single illustration. I find it fascinating as a read and instead of taking up a ton of space as a full length story it just tells a great quick tale, and then lets you imagine everything else that could have happened before offering two possible endings, both quite fascinating and disturbing in their own way. I loved it and it made up for the rest of the stuff in this Dark Horse comic being decent but not as much above-average as Strange Adventures. 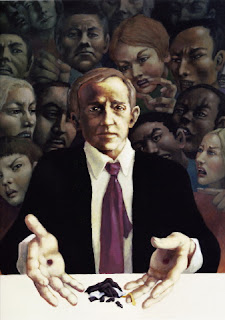 Back to Strange Adventures, with a weird alien tale and some super-hero trappings that would be dull were it not for the fact that Jeff Lemire illustrated it when he wrote it too--and Jeff Lemire's art makes stuff interesting. We then get a totally bonkers story called, "Refuse," that was just gross but kind of awesome in how hideously nauseating it is. After that is a weird tale about this creature who escaped from a lab with his love and blah blah blah. It tries but I saw the twist coming from not just a mile away, but 5 miles away, so eh. After that is a comic called, "Saucer Country," that I am not sure whether it is supposed to be funny, serious, or what--but it is at least somewhat interesting. 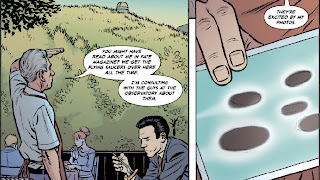 Over in Dark Horse there is an okay tale about dead zombie-thing and wizards or something that apparently will be continued. I could take it or leave it, quite frankly. Then we have a Star Wars tale that sets up something we have to pick up a Star Wars comic to see more of. Again, its decent enough, but I'll pass. After that we get a cute little story called Snow Angel that is odd but strangely charming. Then there are two gag strips that take up a page each.

Lastly, Strange Adventures has, "Spaceman," by Brian Azzarello and Eduardo Risso which is pretty entertaining, although the accents used by the character's makes it a bit hard to figure out what is being said at first.

Yeah, I enjoyed each anthology, with Dark Horse Presents having my favorite tale of, "How Interesting, A Tiny Man," and a few other great stories but then a bunch of iffy ones, and Strange Adventures having some lower-quality stuff and then a good number of quality strips. Therefore, everything evens out and I'd tell you just buy both books and decide which you like more. Yeah, that's an anti-climax for such a long post as this.
4 out of 5 stars.
Posted by David Charles Bitterbaum at 6:00 PM