Television Tuesday: "Rick and Morty," is Back for Season 5 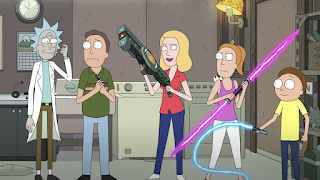 "Rick and Morty," is one of those shows I really like but has a certain percentage of its fanbase that is best described as, "Problematic," or, "Toxic." Fans who miss the point of the show that Rick is--at the end of the day--a villain, a monster, and not ever someone to aspire to be like. Some troubling aspects of the fanbase aside, there are plenty of fans of the show who are great people--some I actually met thanks to the show. Hence, with the return of the series as it brings us its fifth season, we gear up for a fun time and hope we can avoid the off-base hot takes or tweets by the less pleasant fans. The first episode was on Sunday and it was great fun.

In Sunday's Episode, "Mort Dinner, Rick Andre," we spent much of the time dealing with Rick's apparent, "Nemesis," a Namor/Aquaman type named, "Mr. Nimbus," who might flood the planet Earth if Rick doesn't make nice with him for the folly of touching his ship down in the ocean during a crash landing during the episode opener (it seems agreements were in place that Rick doesn't mess with the ocean). The same night Morty has Jessica from school over to attempt a date, Mr. Nimbus comes to the house as well for a peace negotiation. He propositions Morty and Summer's parents (Beth and Jerry) for a threesome, threatens Rick a bunch, and drinks a ton of rare wine that Rick puts in a Narnia-style dimension that has time move quickly so it ages well. That little pocket dimension brings us our B-plot as the creatures there get increasingly upset at Morty for his meddling in their World every decade or so. It is the usual wonky and funny kind of episode you expect from, "Rick and Morty," with some self-loathing thrown in by Rick and a bunch of explosively violent action whenever Morty has to mess with the pocket dimension. 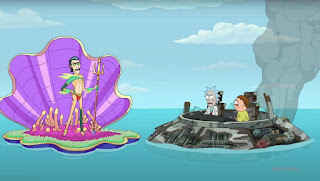 "Mort Dinner, Rick Andre," wasn't as thoughtful or depressing as some, "Rick and Morty," episodes happen to be. It was pretty light--which can be nice sometimes too. Mr. Nimbus is a hoot and Jessica continues to be a bit of a blank-slate character (Morty likes a girl, and that's basically all there is to her, she's an object of affection) but maybe shows minor growth after living in the pocket dimension for eons in a frozen state--or as she puts it upon heading home and having a stranger hit on her by the side of the road, "Fuck off, I'm a time-God." It's a whimsical little episode and the meta-gag that it took this many seasons to meet a random, "Nemesis," for Rick beyond himself was cute. If this pleasantly breezy opener is any indication of what upcoming episodes hold they should be pretty snazzy!