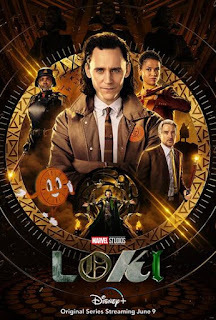 It's about the end of Tuesday and I'm about to discuss a show coming out on Wednesday. That show is, "Loki," the latest Marvel Cinematic Universe offering in Disney+ episodic form. Early reviews are enthusiastic and Tom Hiddleston is always a treat on the screen whether he's a trickster God, famous author F. Scott Fitzgerald, or he could read a phonebook and it'd be great. Now, this version of, Loki we see in, "Loki," is one who didn't pop up in a chunk of the other films as that iteration died in, "Infinity War," and then this one was in, "Endgame," when they traveled through time and accidentally gave the tesseract back to the Loki from way back in the first, "Avengers." Yes, it is confusing even if you read a whole article explaining it. I think the main idea of this show is that we get a mischievous Loki, there's time travel, and we're going to have some fun.

Plus, Owen Wilson is present, he's a good actor too and actually worked with Hiddleston in the aforementioned, "Midnight in Paris." How weirdly cosmic that movie involved time travel and now here we are again with a vaguely similar theme. Anyways, Loki drops in the early morning of tomorrow. I'll be snoozing at the official release time but plan to view it soon after, perhaps with some breakfast toast!