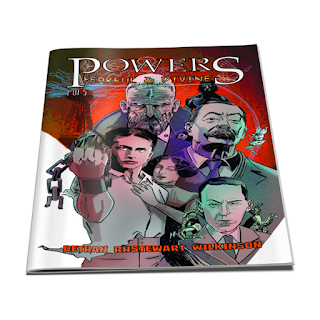 I always enjoy the stuff released by Blue Fox Comics, so when they reached out to ask if I wanted to read the first issue of, "Powers Fearful & Divine," I was excited to do so. It'll be launching a Kickstarter in August and the advance copy I read was quite fun.

"Powers Fearful & Divine," takes a variety of real-life historical figures and imagines them all interacting in a clever manner a bit like, "The League of Extraordinary Gentlemen," but with actual humans. Houdini and HP Lovecraft essentially team up to try and stop Arthur Conan Doyle and the Spiritualist movement from unleashing a deadly weapon on Earth--with Nikola Tesla possibly being the best hope to create a counter-weapon. It's all very clever and fun to see various historical figures working together (or at odds) and writer Cy Dethan does a great job emulating the, "Voice," of everyone, although considering how miserable a person HP Lovecraft apparently was, he comes off a bit too likeable here. Still, Dethan clearly did their research on everyone, spotlighting how Houdini was famous for trying to disprove anyone who claimed to actually have mystical powers as opposed to doing tricks and illusions. 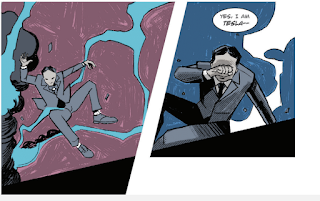 RHStewart is the artist and their artwork works well for the story. Everything looks suitably, "In the past," as it were and the historical characters look like their real-life counterparts, which is always tricky for artists when they are drawing actual people. Sometimes the style is very minimalist, but it looks good overall. There is a lot of dialogue in the comic, but RHStewart always gives us something interesting to look at with the discussions.

"Powers Fearful & Divine," #1 is a great first issue and has me excited to see what future issues will hold for the historical mash-up of famous figures. It does a great job drawing from actual history and inventing other elements. I'd encourage you to check out Blue Fox Comics website so you can stay updated about when the Kickstarter launches!