I Greatly Enjoyed the First Three Issues of, "Harrier." 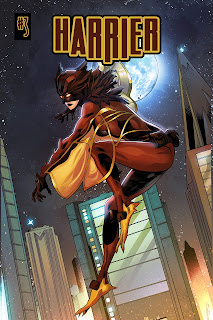 I always love supporting indie comic creators and here in Saint Louis I met Thomas Moran--the creator and writer of the comic, "Harrier." With artist Andrew Henry (issue 1) and Diego Albuquerque (issue 2 & 3) they have been able to put out three issues so far of, "Harrier," and I like what I have read! The series follows a detective named Olvia Jones who becomes embroiled in a massive conspiracy between shadowy organizations and the CIA--of which her father was once a member.

The first issue lays out who Oliva is and puts her through a lot of danger which she recovers from in the second issue (as best she can) and then the third issue is loaded with action as Olvia becomes the experimental, "Harrier," in order to protect a fellow detective from danger. I liked the third issue the most as it was full of cool super-powered fighting and felt like a big release after all the build-up in the earlier issues. 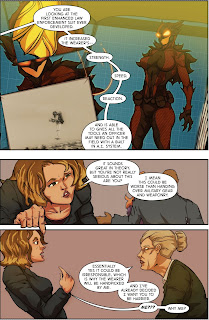 Andrew Henry's artwork is solid, sometimes a little minimalist and abstract but in a manner where everything still looks quite good. Diego Albuquerque is great as well and I love the action he illustrates in the third issue, as I mentioned. Between Moran's writing and Herny's illustrations, I found, "Harrier," to be an engaging read. You can find digital copies on Comixology or visit the Facebook page and message it for physical copies.