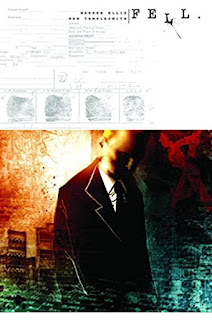 Let's get one thing out of the way. If Warren Ellis wants to write some more comics that is fully his right. If someone wants to work with him to illustrate those comics that is their choice. If a publisher wants to put those comics out they sure can. People who want to enjoy his stellar writing can do so because despite everything, he was and I imagine remains an incredible author. That said, I just can't read Ellis's stuff anymore without thinking about all the pain he wrought on others. That's why upon hearing that Warren Ellis will be finishing his long-delayed comic, "Fell," I could only shrug.

The comic hasn't had a new issue in over 10 years. 5 years ago I would've been ecstatic it was coming back, a bit over a year ago before all the news broke about Ellis taking advantage of women and non-binary individuals I would've been at least a little excited. Now, though? I shrug. Ben Templesmith is back on art and has gotten some ire for working with Ellis again. That's Templesmith's initiative however and if he feels comfortable working with Ellis once more I hope he enjoys his paycheck. I won't be reading the return of, "Fell," because no matter how much I loved the work of Ellis in the past, now I just think about all the lives he impacted in a terrible way. I'm not going to argue against Ellis working or anything--if people want to support him that's their prerogative. I just can't buy his stuff anymore because I am unable to enjoy it.